After having at least a day off due to Wimbledon’s Middle Sunday, the remaining 16 players will be rested and ready to go for their fourth-round matches. From former Wimbledon champions, to #NextGenATP stars and veterans enjoying career-best moments, a wide range of players and matchups highlight Monday’s schedule.

The battle between two of the most attractive one-handed backhands on the ATP World Tour will be sure to produce plenty of rallies that delight the Centre Court crowd. Neither player has dropped a set this fortnight, but Dimitrov has produced more dominant scorelines in his matches. The Bulgarian has lost just 12 games in his past eight sets.
Federer’s decision to skip the clay-court season in order to rest and focus on the grass has so far paid off. He’s produced the form that has brought him seven Wimbledon titles, ripping forehand winners and making timely trips to the net to knock off volleys. Centre Court has become all too familiar territory for the Swiss maestro and he’s playing like he knows every inch of the hallowed court.

Dimitrov is once again showing the tennis that brought him two titles to start the year in Brisbane and Sofia. The Bulgarian has moved on from a tame clay-court season and began working his way back into form with a semi-final finish at the Aegon Championships (l. Lopez). Dimitrov’s powerful forehand and variety on his backhand have led to success here before with a semi-final finish in 2014, so he knows what it takes to excel at SW19.

Although Federer leads their FedEx ATP Head2Head 5-0, they’ve never played outside of a hard court. Dimitrov has continued to improve the scoreline with each passing match, taking sets off Federer in their past two matches. 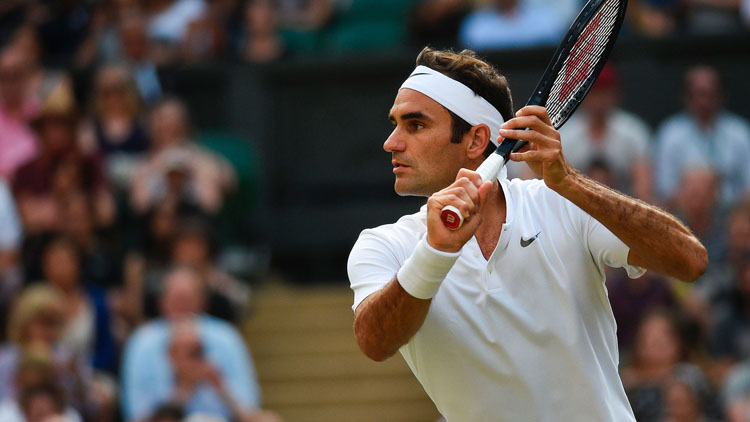 Those who are wondering who will take over from the Big Four in the near future need look no further than this Court No. 2 matchup between two of the most talented stars in the game.
It was perhaps inevitable that Zverev would reach the second week of a Grand Slam at some point in his career, but it’s how he achieved that milestone moment this fortnight that stands out most. The 20-year-old German raced through his first three rounds without losing a set, defeating two fellow #NextGenATP players along the way in American Frances Tiafoe and Austrian qualifier Sebastian Ofner.

Zverev’s continued breakthroughs this season are in stark contrast to the frustrations that Raonic has endured. Right leg injuries have forced the Canadian to withdraw from or pull out of five events this season. But now that Raonic is healthy, he’s been showing the form that brought him to last year’s Wimbledon final in moving past three experienced opponents.

The German won his lone FedEx ATP Head2Head meeting with Raonic this year at the Internazionali BNL d'Italia, but grass is a far more preferred surface for Raonic. He’s already hit 66 aces this tournament, but it will be interesting to see how his serve matches up against one of the best returners in the game in Zverev.

Although casual tennis fans may expect Rafa to sail past Muller, those who have followed the Luxembourg player’s banner year in 2017 know his lefty serve and serve-and-volley tactics could give Nadal fits.
Muller, who sits at a career-high No. 26 in the Emirates ATP Rankings at age 34, was giving a seeding boost due to his grass-court prowess. He captured his second ATP World Tour title of 2017 at the Ricoh Open (d. Karlovic) and was a semi-finalist at the Aegon Championships. Muller has further continued his success on the lawns by reaching the second week at Wimbledon for the first time.

Meanwhile, Nadal hasn’t missed a beat since capturing his historic 10th Roland Garros title. The Spaniard has been prone to early exits at the All England Club in recent years, but sailed through the first week without losing a set. He will also have the benefit of experience on his side. This is Nadal’s 36th appearance in the second week of a major, compared to three for Muller.

Nadal leads his FedEx ATP Head2Head against Muller 4-1, but two of their matches have come at Wimbledon. Nadal defeated Muller in straight sets in 2011, but the Luxembourg player beat a then-19-year-old Rafa in 2005. Although that match was 12 years ago, he may take confidence in knowing he’s defeated Nadal on these courts before.

Previous：5 Things We Learned: Week One At Wimbledon